As the birthplace of Darwin’s theory of evolution, and with one of the highest rates of endemism in the world, the argument for conserving the unique flora and fauna of the Galapagos Islands may appear to be straightforward. Putting aside the intrinsic value of nature and our moral duty to preserve it, the findings made on these Islands have changed the way humanity perceives life in general. This in turn has cemented their place in human history and reinforced the need for their continued protection. However, in spite of their historical importance, this unique Archipelago is feeling the effect of anthropogenic impacts. From invasive species to plastic pollution, the wildlife of Galapagos is under pressure from our everyday lives. 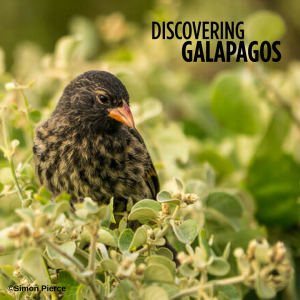 Anthropogenic impacts have resulted from Galapagos population growth, which has risen from around 4,000 residents in the 1970s to over 25,000 today. There are two main reasons for this growth and they are inextricably linked. Firstly, the falling oil prices during the 1970s pushed mainland Ecuadorians in search of alternative work. This coincided with the tourism boom throughout the Galapagos Islands, with flocks of cruise ships heading to the Archipelago and towns beginning to offer mainland stays. The result – an influx of mainland Ecuadorian families heading to the Islands in order to capitalise on this newly emerging industry.

Today tourism is the primary industry on the Islands, accounting for around 50% of total income and is a hugely important part of people’s lives. While it has negative effects, the Galapagos National Park has been successful in minimising the negative impacts of this industry. For example, one study by MacFarland (2000) studied the effects on the breeding of flagship bird species, including waved albatrosses, the three species of boobies and the two species of frigatebirds over several decades. The study found that there was no difference in reproductive successes between visitor and non-visitor sites. This can be attributed to the strict rules and guidelines for visitors around the animals and the restriction of visitors to monitored sites.

One issue that is synonymous with increased tourism is that of invasive species. While there are very strict biosecurity measures in place, historic invasive species such as rats continue to be a significant threat to biodiversity on the Islands. Recent research shows that a total of 1,579 non-native species have been introduced to Galapagos, with the number, occurrence and geographic locations of origin being positively correlated with the number of tourists arriving each year. Significant efforts have been made to remove such species, including Project Isabela led by the Charles Darwin Foundation (CDF) and the Galapagos National Park, and supported by GCT, which oversaw the removal of >100,000 goats across the Islands of Pinta, Santiago, and northern Isabela. 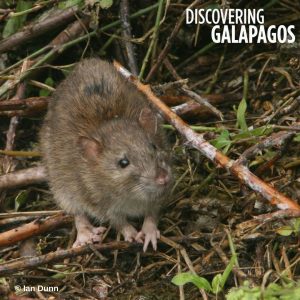 There is, however, work still to be done to reduce the impact of invasives on native biodiversity and GCT has recently begun to support an ambitious project by Island Conservation to rid Floreana island of invasive rats and feral cats. This world-first project seeks to restore the inhabited island to its former glory, with the ultimate goal of reintroducing the Floreana mockingbird and Galapagos racer, amongst other locally extinct species.

The thriving tourist industry can also be seen as an opportunity to boost conservation efforts, for without the unique wildlife in Galapagos, the number of visitors would be sure to drop. This would be a significant threat to the livelihoods of thousands of inhabitants, making the industry’s engagement with conservation initiatives critically important. Here at GCT we have recognised the socio-economic importance of the tourism industry to Galapagos and are now beginning to work alongside tour operators to promote sustainable practices. By informing tourists of the potential impacts of their visit, we hope to instil positive behavioural changes that will help ensure the future of this iconic Archipelago. Small changes, from carrying reusable water bottles and refusing plastic straws, to keeping your distance from the wildlife can go a long way to achieving these goals. 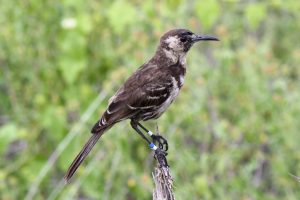 Floreana mockingbird, now extinct on Floreana but to be reintroduced © Sarah Knutie

In addition to this, our Education and Sustainability work within the Islands themselves supports initiatives that reduce the negative impacts of tourism on biodiversity and the environment. For example, under our new flagship programme fighting plastic pollution, we will be running community beach cleans to remove plastics that have washed ashore. Similar coastal clean ups are already run annually, which you can find out more about here, and have proved very successful in the past. We believe such community engagement and education is the key to balancing this thriving industry with the needs of biodiversity and the environment in Galapagos.

Teach your students about the value of conservation here.

You can support our plastics project here.