The mangrove finch is one of Darwin’s 14 finch species that helped inspire his groundbreaking theory of evolution (teach your class about Darwin’s theory of natural selection). Sadly, it is also the most endangered bird in the Archipelago, with only around 100 individuals remaining in the world.

Whilst habitat destruction has played a role in their declines (read more about issues surrounding population growth in Galapagos), the primary driver has been the introduction of non-native species, such as rats and the invasive fly Philornis downsi. After controlling rat populations around nest sites, the number of successful fledglings has increased.

Philornis downsi, however, has continued to reduce numbers of mangrove finches. While the adult fly is harmless to birds, the larvae suck the blood of young chicks, leading to high death rates (teach your class about the impact of invasive species in Galapagos). The Mangrove Finch Project, carried out by the Charles Darwin Foundation and the Galapagos National Park Directorate in collaboration with San Diego Zoo Global, Auckland Zoo and Durrell Wildlife Conservation Trust, is leading the fight against P. downsi to prevent this iconic bird from going extinct. 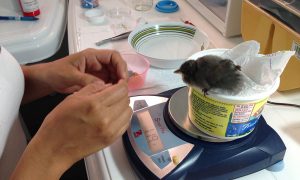 To date they have trialed two approaches to protect young mangrove finches from P. downsi; captive hand-rearing of chicks and pesticide nest injections in the wild. Both techniques have proved promising, with 2017 seeing the first evidence of hand-reared chicks breeding in the wild and the survival of 14 fledglings from injected nests.

Latest news from the field

In early February 2018, the team headed to the coastal mangrove forests at Playa Tortuga Negra on Isabela island to conduct population surveys and administer injections for roughly eight weeks. (Teach your class about the life of a research scientist). Whilst out in the field, the team has been keeping a look out for evidence of captive reared mangrove finches successfully breeding.

Meanwhile, project partners at the San Diego Zoo have been conducting an in-depth review of the head-starting programme, which has released 39 fledglings since 2014. At the end of the field season, the two techniques will be reviewed. Their findings will inform management strategies for the upcoming years. Whilst mangrove finches remain critically endangered, the round-the-clock dedication of the team is helping to ensure the future of this iconic species.

Discover everything there is to know about Darwin’s finches in our Evolution Zone here.

Become a GCT member today to help us fund further crucial projects like this or donate today to help protect species most at risk in Galapagos.